Project AALAB, or the A(utomated) A(rduino) L(ow) A(ltitude) B(alloon) is a weather balloon project I’ll be researching for a projected launch date of summer 2021. The point of the project is to show that an arduino controlled balloon could launch, communicate its findings, & be successfully recovered for future relaunches. The ultimate goal is to have a weather balloon connect to an AURA unit so that I may have a drone fly from the edge of space down to the ground. I’m sure there’s some legislation that I must abide by, but I’m sure there’s a permitting system to navigate around to make my dream com true. Despite the dream, we will focus on the easily attainable & work with the AURA attachment at a much later date.

The electrical system will be a set of rechargeable Lithium Ion batteries with a possible linear power regulator if the voltage needs to be stepped down to 5v or 3.3v.

For video I plan to use an action camera mounted to a pan/tilt servo unit; the 180 degrees of movement will fully capture the awe of flying into near space.

After the weather balloon pops I will have a parachute attached to slow the descent & avoid damaging the materials.

For sensor collection I will use the highly accurate BMP388 for temperature/ humidity readings, the NEO-6M GPS unit for GPS location, & the RockBLOCK 9603 to transmit the sensory data to a computer on the ground. I’ve yet to test how much data sensor script will use, but I’ll use the STM 32 if the arduino nano can’t handle it. Do to sensor limitations of both the GPS & BMP388, the maximum data collection height will be around six thousand feet & temperature will be -4 to 149 degrees Fahrenheit. Despite this limitation I will make due because to get a sensor rated for heights near the balloon pop altitude will require spending $300 on the appropriate humidity/ temperature sensor & GPS. So for now we will remain ghetto.

How It All Works

Typical weather balloons are released into the atmosphere to collect humidity, wind speed/ direction, air temperature, & GPS data for rocket launches, plane flights, & any activity requiring the use of the air. Depending on the required height, balloons can be filled to a specified level to ensure they pop at the right level & to save on either hydrogen or helium gas. To transmit the data to the earth, powerful ground antennas are used to plot the real time location, altitude, & sensory data on a computer. The sensor that transmits the data is called a radiosonde, & varies in price from $100 to well over $500 depending on your needs.

As the weather balloon rises, it ascends through different layers of the atmosphere as seen below. It doesn’t go very high with respect to all the atmospheric layers, only going up to the stratosphere where you ironically see a fighter jet just to the left of it. With every penetrated layer the pressure lowers & the gas in the balloon expands to fill the empty space, which expands the weather balloon from about six feet to well over 20 feet until it bursts & the payload falls to earth with a parachute. Radiosondes may be recovered depending on the operator but mass production & cheap costs makes this unlikely. Typically they’re not recovered & have a sticker on it saying that those who find deployed radiosondes don’t need to return them to a weather station & can just throw them out. This makes for a great souvenir! 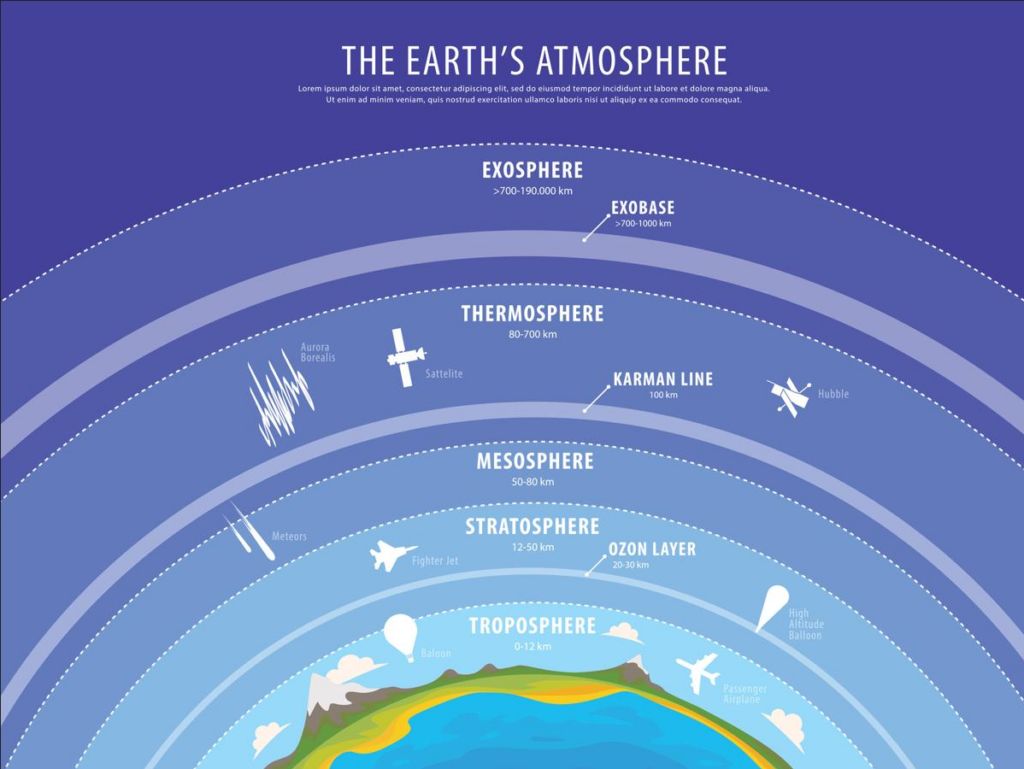