Inspired by my previous article of having an automated home defense system, I thought of going larger than just having a communication system based on protecting a house and communicating the goings on. What if instead I had a wireless comms system that didn’t require a contract, had a decent range, and could be used to route signals to different people depending on their location and relation to the sender/ receiver and to the network? The point is not to compete with previously established networks as this is not a commercial product, but more of an experiment to test my ingenuity & ability to create a comms network from scratch & no formal background. So let’s begin!

The HC-12 has a tested range of 1 kilometer in both signal congested environments and in uncontested Line of Sight (LOS) operations. Before proceeding with the project it must be noted that there are a number of fake HC12 devices on the market that have limited range. Even I fell victim to this a few years ago, but have verified and tested a fix so that fake HC-12s work identically to authentic ones. Credit to DIY TECH BROS for helping the arduino programming community with this important fix. The credit link goes directly to timestamp where the Brothers talk about how to fix the HC12.

Below is the full specification document for the HC12, which discusses the power, data transmission, and programmable component settings among other aspects. You can also take at my previous article discussing the HC12 and the hardware set up needed for optimal signal transmission.

Despite being able to use the nRF24L01 or the HC-12, I personally prefer the HC-12 due to it having a smaller footprint, being easier to program, & requiring less materials than the nRF. 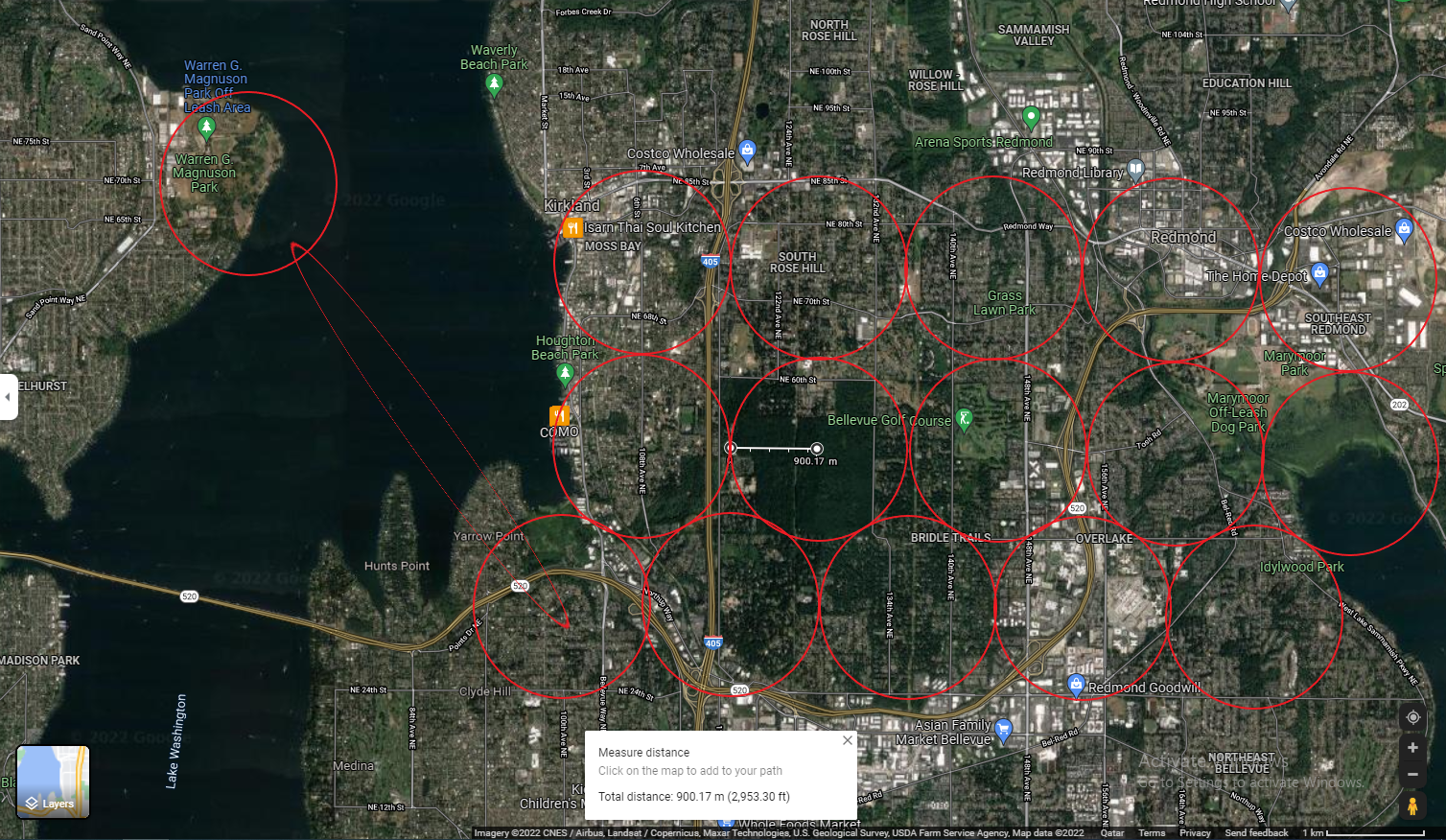 Above is a sample illustration of a relay system that covers the city of Bellevue, Washington. Each of the red circles depict the optimal range of the HC12. Despite the base range being 1000 meters (1 kilometer), I shrunk the range to 900 meters to ensure that when I placed them side by side that I knew there would be enough overlap for optimal signal transmission. If you look at Yarrow Point you see that there’s an elongated signal propagation path that connects the Yarrow point area with Warren G. Magnuson Park. This elongated oval shows the signal transmission path via a multi-element 455mHz Yagi Antenna, which increases the gain of the signal, ensuring it reaches across Lake Washington. You could increase the range significantly by using a signal booster, but since I’ve not assembled one myself & conducted a range test I can’t say exactly how useful it is.

The base function for the signal relay system is in the name, to move signals from its point of origin to a destination. The plan is to have a self assembling hybrid network able to direct signals in the shortest pathway possible. Such a method lowers the latency between initial transmission and signal alert for the user without having a lot of nodes transmitting the same signal over and over again or having end nodes (destination nodes) transmitting a signal that isn’t intended for them to use.

An excellent use case for such a system would be if one needed to talk to family during a disaster event such as a hurricane/ tornado or off the grid operations where infrastructure is nonexistent. By having a DIY system that I personally make, code, & program I know the exact information transmitted so I have no concerns of my information being sold online, collected for secondary uses, or other ways I do not explicitly consent to. It also provides a great learning opportunity in setting up a mesh network with no internet connectivity, boosting my skills to a significant degree by having a fully functional deployed system. Upon making this system I could interface any project into it such as Project RCAT, or Project Castle Guardian, increasing both systems’ functionality. Despite me previously making the Signal Relay System’s (SRS) subsystems such as interfacing with the HC12 radio system, assembly & operation of the power systems, making of the signal relays themselves as well as a lot of the troubleshooting, code formation, etc. its no excuse to get overconfident & assume that everything will work for this iteration. Testing, troubleshooting, prototyping will still need to be conducted to verify viability as well as futures testing to investigate enhancing the SRS’ capability.