In the coming weeks I’ll be posting projects from other websites and give my creative two cents on how I think they could be improved. Though not an expert, critiquing these projects will be fun as it gives you and I a great chance to check out the hard work these makers put in and help take their projects to the next level.

Today’s target comes from Maker Pro, a site I follow on Instagram & its a pretty cool account to say the very least. Their project is a mini automated green house for micro-greens capable of adjusting the humidity, temperature, & soil moisture of said green house. I really love the project they made, but let’s see what changes could be made or changes I would make to streamline or enhance the project further. 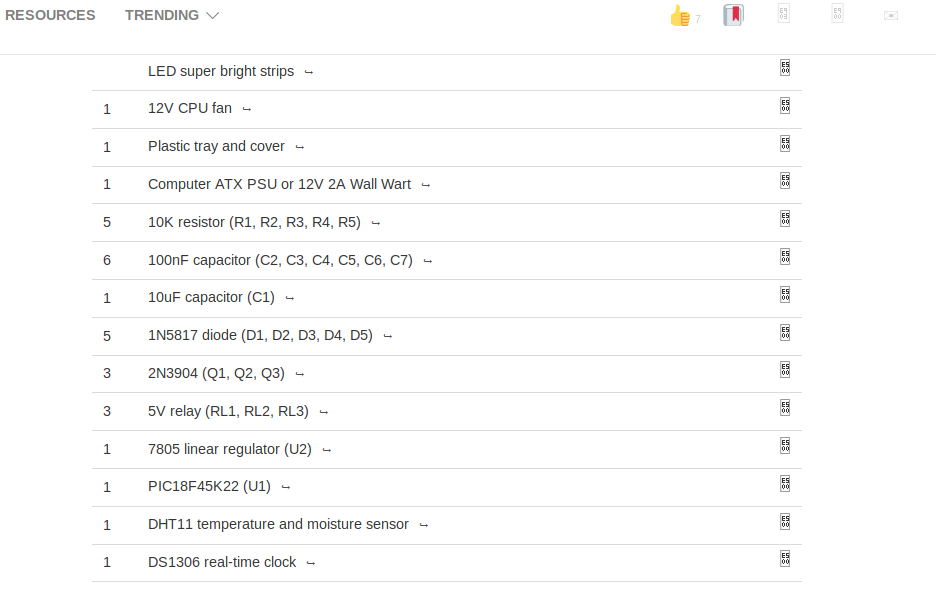 The provided list is very detailed & exhaustive, but I would opt to go with the arduino micro controller being that its cheaper ($2 max) & the IDE is quite simple to develop. Also, the list provided can be significantly reduced if you replace his materials with manufactured products. An example would be the diodes, linear regulator, resistor, & transistor used to assemble the relay. While great for teaching those new to the field & those who truly love building everything from scratch, your average entry level hobbyist could find this cumbersome compared to buying a preassembled unit.

The microgreens system is primarily concerned with temperature/humidity regulation & hydrating the soil, so we will approach it with that objective in mind. Upon start up the arduino will take note of the date & time via the DS3231 RTC connected via the A4/A5 I2C pins on the arduino. If the time is greater than or equal to daylight hours defined by 10:00a.m.- 5:00 p.m. the relay connected to the growlight is activated to turn the light. With its activation the plants will have obtained the necessary nutrients to survive & thrive long term.

The soil moisture sensor is activated intermittently to lengthen its life since electrolysis will eventually corrode over & require replacement. My suggestion would be to activate the sensor at least once during mid day to ensure water can be delivered when its typically the hottest. If the moisture sensor detects dry soil the arduino kicks on the relay for a pump that will hydrate the soil. Verification must take place to see how many seconds it takes to properly fill the container with water before cutting off. After shut off I would suspend humidity regulation until approximately 20 minutes when the water will have enough time to settle into the soil.

Provided there is no active timer for proper soil saturation, the DHT22 will have its values constantly monitored to maintain optimal heat/humidity for plant growth. If the temperature or humidity is too high a fan will be activated just as Maker Pro suggested be done to pump drier air into the green house. However, if the humidity is high enough for a sustained amount of time despite the dry air intake, option 2 will be activated. This option involves the heat lamp activating for 10 or so minutes to force the evaporation of moisture from the soil into the air & activating the fan to then force it out by activating its relay. This is done several times to rapidly lower greenhouse humidity.

In cases where only the temperature is too high, only the fan will be activated to drop it. This of course means that a low temperature read out requires the heat lamp to activate while the fan deactivates; a secondary effect to this is that with the heat lamp microgreens can be kept year round without concern about cold temperatures freezing & thus killing the plants.

This is a simple revision of Maker Pro’s awesome idea for a greenhouse, but there are still other improvements that could be made to further the changes I recommend such as the following:

***I’d like to thank Maker Pro for this awesome inspiration as they do a good job providing informational projects designed to stir the mind & jump start a maker’s imagination!