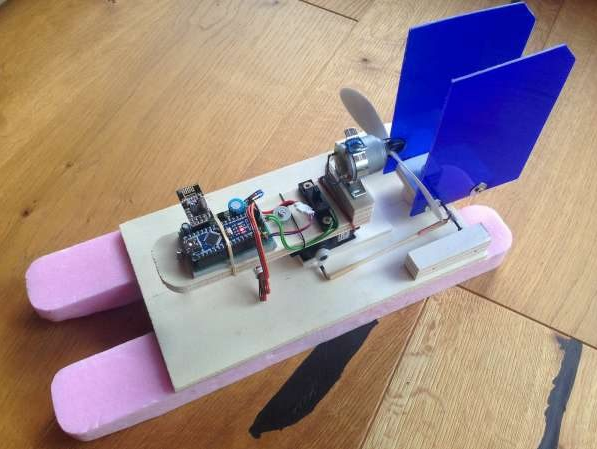 Project ROWAN, or the R(emotely) O(perated) W(aterborne) A(rduino) N(avigator) is a remote controlled boat I’m planning to make for river/ocean navigation. Its a design I’ve seen other programmers build on Youtube & would like to make my own boat with the added function of being able to work remotely. The system itself is very complicated for me, but I’ll do my best to break down the subsystems so that its easy to understand while also not tripping myself up in the process.

I.            Primary Power- Will consist of four lithium polymer batteries connected in parallel to boost the available amperage. Will power all systems except for processors such as the Arduino. Each battery   has their respective positive wire connected to a relay to allow for individual charging if a specific battery were excessively drained. Also allows both sets of batteries to alternate charging cycles to       maintain energy availability.

II.            Secondary Power- The Arduino & all processing components will have a separate battery connection to avoid any damage that may come from voltage spikes or failure from the primary batteries.

V.        Battery Charging Circuit- Lithium polymer battery chargers that activate when the voltmeter determines the voltage is too low. Reconnects once fully recharged.

I.            Analog/ Digital Multiplexers- Adds extra ports for sensors to send/ receive data from the Arduino.

II.            Temperature/Humidity Sensor- Does what it says. Extra information is good to have.

III.            Battery Voltmeter- Measures battery voltage & sends signal to Arduino when levels are too low. The Arduino then disconnects the battery from the system & connects it to the charging circuit.

IV.      Battery Charger- Charges individual batteries when connected by the arduino microcontroller. Is disconnected from battery when voltmeter detects battery is full.

I believe the initial version of this project needs to be made of foam until I’m able to work out the kinks & escalate to using sealed pvc pipes. The weight of the craft won’t be very heavy as the batteries & sensors are comparatively light to the pvc itself.